Step back in time and take a self-guided tour through Eureka’s Old Town Waterfront District.

Walk the blocks of this restored commercial area of Eureka’s original waterfront district where time remains in the Victorian era of the late 1800s.  Having missed the Urban Redevelopment phase of the 60's, Eureka now finds itself as one of the few remaining reminders of the old commercial centers.

Eureka was established in 1850, not as the lumber town it eventually became, but as a transportation and supply center for the Gold Rush that was happening along the Klamath and Trinity Rivers. Since Humboldt Bay was the source of all commerce at that time, a business district developed along the shoreline with offices, merchant shops and saloons.

Today, these blocks of vintage commercial buildings have been lovingly restored, and now contain bookstores, restaurants, coffee houses, galleries, museums and a variety of unusual boutiques. 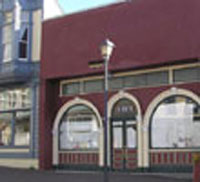 1. 516 2ND   (2nd between G & F St)
Originally: THE OBERON SALOON
Style:  Classical Revival     Built:  1886
Clientele from the Vance Hotel frequented this saloon where the walls were once decorated with oil paintings and tapestries.  It is most remembered  for a fight started by Jack London in 1910. 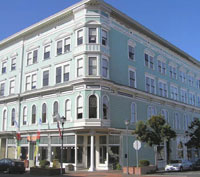 The Vance Hotel was the social and commercial center of town for many years. 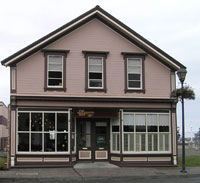 3. 423 FIRST ST (1st & F St.)
Originally:  BUHNE GENERAL STORE
Style: Greek Revival  - Built:  1869
This is one of the oldest buildings in Old Town.  Constructed as a general store for Captain H.H. Buhne (who also brought the first large group of settlers into Humboldt Bay in 1850). 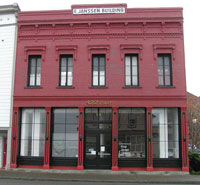 4.   422 FIRST ST JANSSEN BLDG.  (1st & E St)
Style: Italianate   Built: 1875
Highlights of this building are the six cast-iron columns on the main floor in front and the corniced label moldings located above each of the five second floor windows.   Housed the first elevator in Northern California. 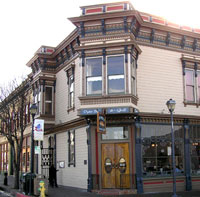 5.   102 F ST – CAFÉ WATERFRONT (1st & FSt)
Originally: THE WAVE SALOON/THE WEAVER BLDG.
Style: Eastlake   Built:  1892
This building remains substantially unaltered from its original design.   Originally the Wave Saloon, a gathering place for fishermen, stevedores and  later on, loggers.  “The Bluebird Rooms”  (a brothel) were on the second floor.  Today:  You can still get a drink, but it’s going to be a micro-brew or  chardonnay to accompany the daily seafood special. 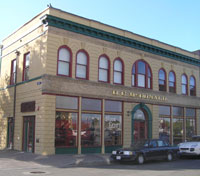 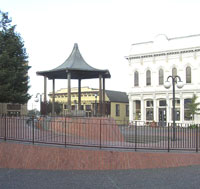 7.   THE GAZEBO   (2nd & F St)
The Ferry Terminal that was located at the foot of F street, original entrance to city, made this the busiest street in town.  Today:  A Gazebo occupies this old town square.  Still a gathering space, especially on the 1st Saturday of every month when the pigeons make way for vendors and entertainers. 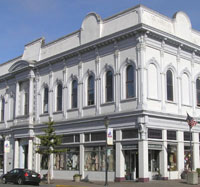 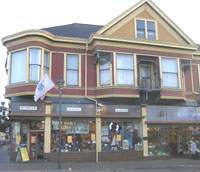 9. 208 F ST- MANY HANDS GALLERY (2nd & F St)
Originally: The Pacific Pharmacy Bldg.
Style: Queen Anne
Built:  1893 The gables, roof and façade are representative of the Queen Anne style.  Started out as the Pacific Pharmacy and continued as a pharmacy until the 1980’s.  Today:  You can find many fine art and fun collectables at Many Hands Gallery.  Here you will find a nautical section complete with pirate flags.  Some of the other shops in this complex offer fine arts, jewelry, antiques and beads. 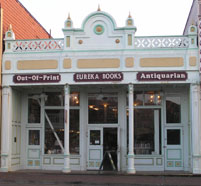 10.  320 2nd St. – EUREKA BOOKS (2nd & F St)
Originally: Lowenthal’s Haberdashery – The Louvre Café in 1925
Built: 1873  With humble beginnings as a café, the Louvre transformed into a  tough logger bar, the ‘High Lead Saloon,’ as the logging industry grew in this area.
Today:  A treasure trove of old and out of print books. 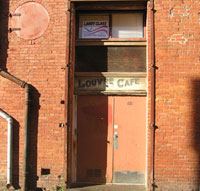 12.   416 Second St  - (between E & F St)
Originally: The Cousins Building.
Style: Classical/Mission Revival
Rebuilt:  1905 after a fire.Constructed in the 19th century & rebuilt with this eclectic façade.  The scroll parapet – a Mission Revival style also has elements of Classical Revival.  One standout is the window frames with "bound" garland. 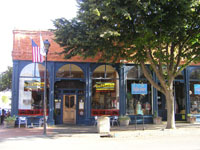 13.    403-11 2nd   (2nd & E St)
Originally: C.W. Long Building
Style: Italianate     Built: 1877
This commercial building has the standard Italianate simple detail, brick with a decorative cast-iron storefront, representative of the commercial buildings of this era.  Today: You can stop in at Los Bagels for breakfast, lunch or a snack and then browse the retail  shops along this block. 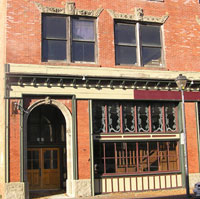 14.   325 2nd St (2ns St between E & D St)
Originally:  DREAMLAND
Style:  Classical Revival    Built:  1908
Originally known as Dreamland, where you could buy a dance for a dime.   It  then became a  theater, skating rink and  Old Town Bar & Grill.  Special features of this building are the highly decorative concrete window surrounds. 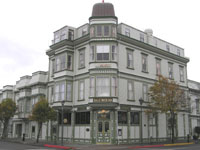 16.   THE INN at SECOND & "C" (2nd & C St)
Built:  1886
This Eureka Landmark began as a hotel & restaurant. In 1893. Competition from a nearby hotel inspired the owners to split the building into two sections, move them aside and erect a three story edifice on the site, incorporating the original sections as wings.  Alteration in 1984 added a theater &  penthouse giving the structure a 4th floor. 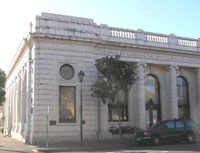 17.    240 E ST (3rd & E St)
Originally:  THE BANK OF EUREKA
Style:  Classical Revival   Built: 1911
Constructed for the Bank of Eureka and designed by Albert Pissis an important San Francisco architect.  This building features a  granite base with brick walls covered in glazed architectural terra cotta, typical of this style.  Today:  The Clarke Historical Museum and the Eureka Visitor Center.  Houses artifacts of Humboldt history with ever changing displays, including the Victorian period.  The Native American Wing features a world-recognized collection of baskets, regalia, stone and wood objects.

18.    227 F ST   (3rd & F St)
Originally:  THE INGOMAR THEATRE
Style:  Sullivanesque   Built:  1892
The Carson Block -  In the face of a logging and milling recession, Wilam Carson decided to erect this building, designed by Samuel Newsom.  In addition to office, commercial and residential spaces, it contained the Ingomar Theatre, an opera house designed to seat 1,400.  The theater closed in 1912. Today: Totally refurbished to its original state.

20.    600 2ND ST   (2nd & G St)
Originally: THE BUHNE BUILDING
Style:  Renaissance Revival   Built: 1884
The outstanding features on this building is the cast iron storefront and brick elevations and arched windows.  This was designed for commercial and residential use with a public hall on the 3rd floor for social events.   Today:  Artist studios have taken over the offices.

22. 117 F ST – VANITY  (F between 1st & 2nd)
Originally: THE SNUG BLDG., A Saloon
Style: Italianate   Built: 1890
Originally outfitted as a saloon, then a barbershop and bathhouse.  Located at the very entrance to town from the port, it would have been a very busy place.   Today: From “hair raising” to “hair styling,” it is now  Vanity, a hair salon and spa.


STYLES:
Classical Revival – Based on the architecture of ancient Greece and Rome, was one of the most widespread styles in the United States during the late 1800s and early 1900s. Its versatility was adaptable to a wide range of building types and budgets. Common characteristics: Symmetrical facades - Minimal use of bays, towers or other projecting building elements - Classical ornament, including columns, cornices, and triangular pediments -Variety of materials, including brick, stone, terra cotta, and wood.

Italianate - One of America's most popular 19th-century styles, derived from the architecture of Italian villas. It was popular in the late 1800’s for a wide variety of building types, from houses and small apartment buildings, to institutional structures.  Common characteristics are: Vertical proportions - Tall, rounded windows and doors - Stone trim with incised foliated ornament - Intricate wood or pressed metal cornices.


Eureka’s waterfront could give the Barbary Coast a run for its money, so much so that writer Jack London came here in search of authentic tough guys on which to base his characters. People still talk about what happened to London when in 1912 he got on the wrong side of a local lumberman in the Oberon Saloon.