EUREKA, CA -- Whether for hikes, hugs or holy encounters, an amazing number of botanical giants await on California’s Redwood Coast, home of the world’s tallest trees. So follow in the footsteps of Luke Skywalker and Brad Pitt to see these wonders in Redwood National Park and near the Avenue of the Giants in Humboldt County, just a few hours north of San Francisco and easily accessible from Hwy 101. 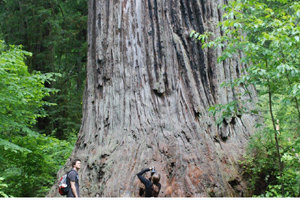 1. Big Tree
This old growth giant in Redwood National & State Parks has a circumference of 68 feet. This tree lives up to its name! On the Newton Drury Scenic Parkway near the Prairie Creek Visitor Center, the tree is an estimated 1,500 years old. 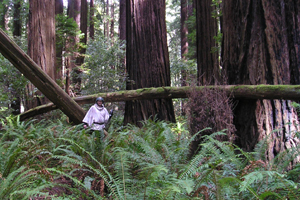 2. Star Wars Tree
Return of the Jedi transformed Grizzly Creek Redwoods State Park’s Cheatham Grove into the moon of Endor. See Luke and Leia, while pursuing stormtroopers on landspeeders, duck under a downed tree (0:18s) and skim over this odd crossing of limbs (0:49s): vimeo.com/90760828. Better, re-create the experience in character like Kevin Armstrong from Canada: bit.ly/starwarshumboldt. May the Forest be with you. 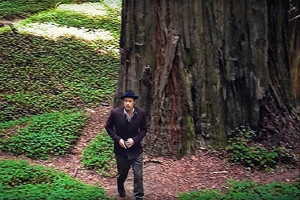 3. Brad Pitt Grove
OK, he doesn't really have one, but the Hollywood hunk recently hiked in Humboldt Redwoods State Park and chose this lush spot in the Grieg French Bell Grove for a relaxing Pitt stop. See more Brad in the big trees here: bit.ly/pitthumboldt 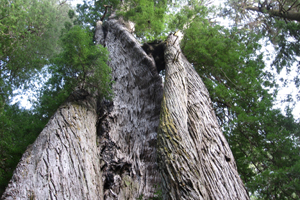 4. Corkscrew Tree
This photogenic oddity has four trunks intertwined together as they reach up skyward. Located in Redwood National & State Parks, just north of Big Tree on the Newton Drury Scenic Parkway. Children find its twisting nooks irresistible to explore. 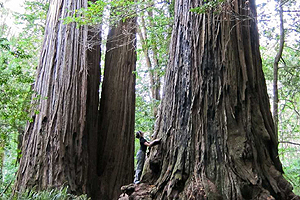 5. Tall Trees Grove
The discovery of the world's tallest tree in this hidden old growth forest led to the creation of Redwood National Park in 1968. Pick up a free permit to hike to grove, considered by some the most beautiful in the park, at the visitor center in Orick. While Tall Tree lost its title, the current recordholder remains hidden in an undisclosed location nearby. 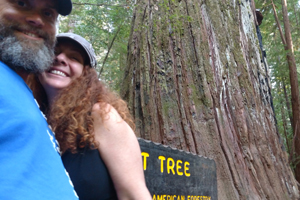 6. Giant Tree
Not the tallest redwood, but this specimen in Humboldt Redwoods State Park is pretty much the best in show. Designated the National Champion Coast Redwood for having the best combination of height, diameter and crown spread, it could be dubbed Big Beauty. Perhaps the largest redwood in terms of mass, it is in the park's Rockefeller Forest, the world's largest stand of old growth redwoods, 10,000 acres! 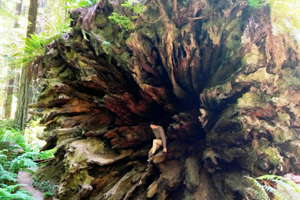 7. Dyerville Giant
Once perhaps 400 feet high, this champion tree crashed to the ground in 1991, creating a thunderous roar akin to a train wreck heard for miles around. Despite being horizontal, it still impresses visitors, sporting a huge uprooted root cluster with wooden dreadlocks sprouting in all directions, and an enormous crater where it once stood. Off the Avenue of the Giants in Humboldt Redwoods State Park's Founders Grove. 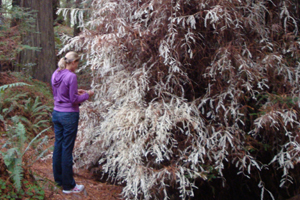 8. Albino Redwood
Only a handful of these rare forest ghosts exist, including the most picturesque of them all, the so-called Christmas Tree in the Women's Federation Grove on the Avenue of the Giants. It's near the grove entrance but there's no marked trail. Best to ask politely at the nearby Humboldt Redwoods State Park visitor center for directions. 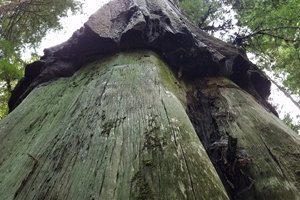 9. Girdled Tree
Despite being thin-skinned, this remarkable tree endured a major insult. A century ago almost all of the first 30 feet of bark were removed and stitched together in a San Francisco exibition. Remarkably it survived. Today a massive scar illustrates the resilience of this species. Off the Avenue of the Giants in the Grieg French Bell Grove in Humboldt Redwoods State Park. 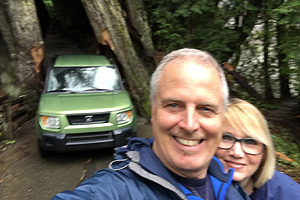 10. Shrine Drive-Thru Tree
While the Yosemite Tree fell over decades ago, you can still steer your wheels through a living tree. In fact, there are THREE, all on the Redwood Coast. The most distinctive is on the Avenue of the Giants, the Shrine Tree, as nature, not man, carved most of its tunnel. A perfect place to pose with your Delorean. Pining for more? See these trees and honorable mentions like the Darth Vader Tree, Stroll-Thru Tree and Horse-Thru Tree in an artsy online gallery: bit.ly/tenmustseetrees